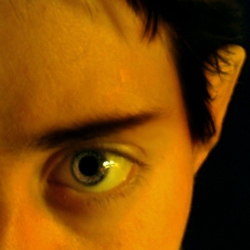 Born on Vulcan, T’Kirr grew up in the desert climate of her home planet. At age 38, soon after her bout with severe dehydration, she moved away from her home region and deep into the cool, cavernous, underground dwellings of Ritral for several years. She soon grew to miss the dry heat and moved back near her parental estate in Surkanar.

After returning to Surkanar, she started a humble trade, using her artistic skills in handcrafting statuettes and other meditational products requested by the community.

At age 55, T’Kirr began study at the Vulcan Science Academy. During the next year, T’Kirr took part in a class research project involving a nearby nebula when their shuttle mysteriously lost structural integrity and depressurized. After several weeks of recovery, T’Kirr received counseling to help her feel safe within starships again.

Several years later, having served in laboratories across Vulcan and nearby starbases as scientist Viruk’s assistant, T’Kirr began to show interest in the Federation and joined Starfleet while simultaneously studying Human culture. She also took courses in other xenology, and some stellar cartography.

T’Kirr has always been fascinated by geometrics. She considers herself tolerant of other species, believing in the advantages of diversity. Her introversial preferences conflict with her natural curiosity, and she may often times find herself hesitating on what social action may be appropriate.