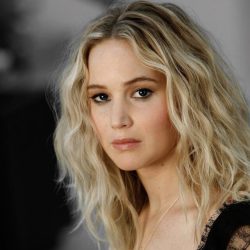 Linxi has an athletic build, due to combat practice and sporting activities. She often keeps her hair long and dyed brunette, but recently cut it short to grow out her original blonde hair. Like the rest of her species, she has black eyes. She carries herself confidently, with a slight pep in her step.

Linxi is often sarcastic or teasing; she is usually non confrontational, but will stand up for herself and others when provoked. Unlike others of her species, she is quicker to fight, than use diplomacy.

Linxi was born on the 13th of November to Delvera and Neron Jude on Betazed. Linxi’s mother is a traditionalist, and stubborn, and has always attempted to raise her first born in a strict manner. As a child, Linxi was made to focus on arts related hobbies, such as painting, theater, and music. While Linxi did not oppose to learning to play an instrument, she veered away from her mother’s suggestions and went with the Earth instrument, the trumpet. With every action Linxi took away from the traditionalist approach, Delvera kept steering her away. She also attempted to get Linxi to marry into a higher class, without success.

Linxi eventually got tired of her mother’s strict parenting approach and reached out to her father, who was, and still is, a Starfleet engineer. With the permission of his captain, Linxi was allowed on board, where her father showed her many aspects of working on a starship. As such, Linxi was intrigued by science, and started focusing on that. Only a few months into being on the ship, they got into a battle, leaving many of the crew wounded, including her father. Seeing all the damage, and all the wounded crew piling into sickbay caused an aversion to that particular part of the ship, which she would avoid in order to stop the flashbacks she would have.

Even while on the starship, Delvera would message Linxi, trying to persuade her to do certain things, as well as constantly trying to put her up with somebody. The pressure that Delvera put on Linxi to be “perfect” in order to get married caused a huge strain on their relationship. Linxi, to this day, avoids all contact with her mother.

Linxi, when she turned 18, made the decision to join Starfleet, partially after her own father’s guidance, and the pressure and anxiety that traditional Betazoid society caused her. While she did not mind leaving three of her siblings behind, she wished she could have brought Sivat, her youngest brother. Sivat is the second of the Jude siblings to display a natural ability for learning, only in his case, it is engineering.

It was not until she arrived in San Francisco that she found out that she was already bonded to a male Betazoid. As her mother always badgered her to “find somebody”, she did not think she was part of this old tradition. However, when she found out, she sent a strongly worded letter explaining that she would not be returning to Betazed permanently any time in the near future and any wedding plans were postponed indefinitely.

Since the beginning, Linxi was a wildcard. Despite knowing she wanted to be in the sciences, she took various classes in tactical (of which she found she was good at) and engineering (not so much). Her ability to take certain knowledge and apply it in other areas especially benefited her when fencing sabre (the fast moving, seemingly erratic moves fit her style better than the slower tempos of foil and épée). To her, it was a physical form of chess- watching an opponent, and then countering and striking. Even without the use of her telepathy, she could easily and quickly, process the information from another’s body language, and use it against them.

The only classes she nearly failed were Zero-G Training and Psychiatry & Mental Health. Linxi had an issue of repeatedly throwing up during the Zero-G simulations. Linxi was also awful at understanding psychiatry, despite the stereotype that all Betazoids are good at it.

As an elective, Linxi also participated in the marching band. For two years, she played the quint-toms in the percussion section. Third year, she was collectively elected as an officer, still marching, albeit more responsibility. Fourth year, she was elected as an assistant drum major.

Linxi had a mild authority issue, especially when told to work things out using diplomacy. Once, she had a conflict with a Klingon cadet, and she went to headbutt him, only to pass out from the impact and wake up in sickbay with a massive headache and disciplinary warning letter. She also tended to challenge other cadets to various physical challenges, just to show off. Linxi graduated around the 67th percentile.

Linxi is in good physical health besides two allergies, wasp stings and peanuts. With wasp stings, she gets mildly dizzy and nauseous. If she accidentally eats anything with peanuts, she will get a rash on her neck and upper torso, as well as nausea. While they may be uncomfortable, she is expected to live through them.