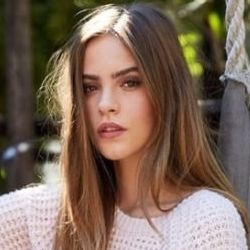 Ryleigh takes after her mother in basically every physical form. She has the same brown hair and shade, and same brown eyes as Rebecca does, but there is one thing that is different. She has a particularly lithe build, built for quick movements and scouting unseen.

She switches between wearing glasses or contacts and carries herself with a confidence. While the medicals have improved their corrections, she had always chosen to never carry through with any corrections or repairs, like to keep her contacts and glasses.

Born to Starfleet Marine Lt. Colonel Anthony and Rebecca Grey on the tenth of July, Ryleigh was a normal child growing up. She lived on a military base down in Texas, thriving and having the best of times with her friends that lived on the same base when not in school. She considers base life to be one of her best life experiences because it taught her a variety of unusual characteristics that most people don’t get.

She attended schools on and off base over her years of life, and found herself moving to California to attend Starfleet when she was barely old enough to be making her own way in the world. As she grew, she found herself aspiring towards following her father’s own path into the Starfleet Marines, particularly in tactical operations.

While at school, she met a fellow boy from a family her parents had been close to, called Ethan Jasper. Things hit it off between them, and soon, they were officially ‘together’. They dated on-and-off for eleven years, moving in together with a puppy added to their family soon after… and a few months after the puppy’s arrival, Ethan was proposing to Ryleigh.

They’ve been married a mere four months at this point, and are adjusting to married life aboard Atlantis… just as it should be. Of course.

Ryleigh considered her schooling years to be the one thing that prompted her intense focus into medicine and other paths. She attended a variety of schools ranging from private catholic all the way to public high schools throughout her years living on and off base, and she was one of the best students in her classes, excluding in math. She always struggled to barely pass the required math courses. Throughout her schooling years, she found that math had always been a struggle for her, but science and history came to her like the back of her hand. This didn’t come as a surprise when her math grades came back as low Bs and high Cs.

When she graduated from High School, she headed off to Starfleet Marine Academy, planning to double-major in Tactical and Medical, and a minor in Communications and Operations at the end of her academic career. Ryleigh thrived under the pressure and managed to deal with anything that came her way.

She accomplished everything she had put her mind towards and found herself graduating with pretty high grades, higher than her high school ones were at any rate. After graduation, she was immediately assigned to the USS Atlantis as a Tactical Officer and Field Medic, acting as Marine in the case of emergencies as well.

Ryleigh was born with a particularly debilitating injury. She has been impacted by this injury for her entire life, particularly in her interactions with people, seeing that it was her frontal lobe damaged. Her frontal lobe injury doesn’t always impact her behavior throughout her life but is majority seen in social situations. She struggles with social interactions but has definitely improved those skills over the years. Her injury also contributes to her particular skill with tactical, able to pick up facts and plan with an incredibly quick mind.

She has also experienced several sprains and twisted limbs, and a variety of insect and animal bites. When she was in sixth grade, around the age of 12, she was diagnosed with tendonitis in her left ankle which took her out of PE for almost an entire school year. When she was in ninth, at the age of 15, she was diagnosed with bursitis in her left hip, which flared up in a variety of times throughout her years in school.

She doesn’t have many allergies, but one of the most important is the fact that she is allergic to the main anti-biotic in pinkeye medication. It results in her getting hives, and if not treated, she can go into anaphylactic shock.


A Newly-Engaged Tactical Officer
Posted on May 2nd, 2019 by Ryleigh Grey
Posted in Logs   4 Comments


Getting Along
Posted on April 24th, 2019 by Linxi Jude and Ryleigh Grey
Posted in Logs   4 Comments


Scrub Up: Riley Grey
Posted on March 4th, 2019 by Emilaina Acacia and Ryleigh Grey
Posted in Logs   3 Comments   Log of the Month Award