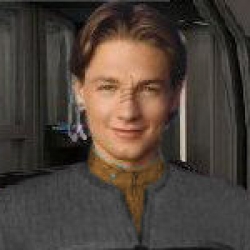 Laner is somewhat tanned, with dirty blond hair, and bright blue eyes. He wears a d’ja pagh on his right ear, as traditional in Bajoran culture, while off duty.

He is slightly hunched over, which he knows is bad posture, but has failed to shake the habit from bending over consoles to a great extent. Laner also possesses a stutter, a result of delaying medical care for a concussion as a child.

Laner was born on Bajor to Razyn Jarsan and Razyn Shixola in the Dahkur Province, which was an agricultural region. Despite his parents’ best attempts, Laner always ended up creating, and playing with gadgets and gizmos a-plenty! Due to his affinity to make things go flying, or ‘boom!’ he was always popular with the other children in his town. You wanted a thingamabob? He had twenty!

However, as he was testing out one of his contraptions, it blew up in his face, one piece causing damage to his vocal cords and brain. He unknowingly had a concussion, and so he fell asleep, only to wake up the next day with a stutter.

By the time he was old enough to make the decision to join Starfleet, he had helped his parents increase the sustainability and productivity of their farm with his ‘inventions’.

Laner did exceptionally well in engineering, particularly mechanics, as well as botany and zoology. He struggled with tactical and medical based classes, and languages, particularly Vulcan.

As a child, one of his inventions blew up, causing damage to his brain and vocal cords. He went to sleep that night, unknowingly having a concussion, and woke up the next morning with a stutter. The damage done to his vocal cords and brain are irreversible, due to waiting too long for medical care. The damage to his brain has to potential to cause seizures, and as a preventative measure, he takes a 0.01 ml dosage of Tricordrazine every day.