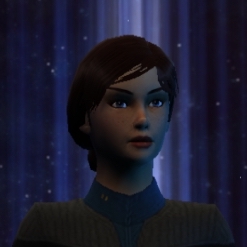 T’Lira has dark brown hair that she prefers to keep in a bun and blue eyes. While she is what could be considered an “average” Vulcan, she carries scars from the Dominion War, gained from fighting off Jem’Hadar as a cadet to protect evacuating shipmates aboard the USS Freedom. The most prominent of these is a long scar on her left arm from the elbow to her palm, where a Jem’Hadar blade sliced through her uniform. T’Lira also has a slight facial tic that appears when she is burying turbulent emotions deep below her “frosty” Vulcan exterior. Her left hand will start twitching.

T’Lira is the daughter of Sevan and V’Lana, one of five children. Her older siblings are Sorek, T’Pela, and Sivel. Her younger brother is named Surith. They all grew up on the Cor Coroli colony, with both parents being noted researchers. T’Lira often spent time in the labs, listening to another scientist named T’Pas as she explained what she was doing in careful detail. It wasn’t until years after T’Pas’s death that T’Lira even met the woman’s daughter, Soleta.

T’Lira was accepted into Starfleet Academy at 22 and was involved in several encounters with the Dominion. After graduation, she served aboard Starbase 217 until the destruction of Romulus and Remus. That was when she took extended personal leave from the ‘Fleet to provide assistance to the survivors.

She is unmarried, but adopted a Romulan orphan named Taril, who aspires to one day be the first Romulan in Starfleet. T’Lira reminds him when he says this that there are already part-Romulans in Starfleet, although Taril responds with “But I’ll be the first full one!”

T’Lira entered Starfleet Academy at what is considered an”average” age of 22. She excelled at her science, engineering, and command course. However, she didn’t do so well in her combat, medical, and history courses. She did well enough in her piloting and navigation courses, but had difficulties with emergency starship piloting simulations. She had trouble with combat after the Dominion War and has since taken the firm belief to only fight if her life, and the lives of her crewmates, depended upon it.

This did lead to conflict between her and her tactical major roommate, Juliette Harris, and she has a reprimand on her file for locking her roommate out in order to “obtain a more logical environment”.

Other than her physical tic and scars, her file is perfectly standard.

Case of the Missing Plants
Posted on June 19th, 2021 by Rike Herschel and T'Lira
Posted in Logs   3 Comments


A Strange Sort of Irony
Posted on June 12th, 2019 by T'Lira
Posted in Highlights   3 Comments


Latent Wounds
Posted on July 17th, 2018 by T'Lira and Kathryn Harper
Posted in Logs   2 Comments   Log of the Month Award


Curiousity Didn’t Actually Kill the Cat, Did It?
Posted on November 8th, 2017 by T'Lira
Posted in Logs   2 Comments   Log of the Month Award


Through Fire We Walked to Emerge Unscathed
Posted on June 14th, 2017 by T'Lira
Posted in Logs   3 Comments


Theories and Reactions
Posted on February 15th, 2017 by T'Lira
Posted in Logs   1 Comment   Log of the Month Award