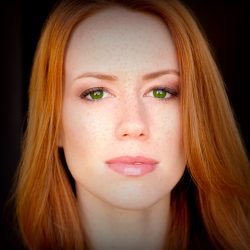 Kathryn Harper was born on Risa in the small coastal town of Lunat Bay, approximately two hundred kilometers north of Suraya Bay. Her parents operated an aerial sightseeing business, and taught her to fly their aircraft at a young age. Although her family prospered from the tourism that came to power the Risan economy, they held to the traditional cultural values predating Risa’s ascent to the premiere vacation planet in the Federation. Their efforts to instill those values into their only daughter did not succeed, as constant exposure to offworlders drew the insatiably curious girl’s mind toward the stars, while the rural environment fostered an innate fascination with the natural world.

It was therefore no surprise to anyone who knew her when Kathryn applied to Starfleet Academy as soon as she reached the Risan age of maturity, approximately twenty standard years, and then immediately left for Earth upon her acceptance. She chose the science track, but took as many classes in languages and xenolinguistics that she could possibly fit in, discovering a natural talent in that area. The Academy environment was an endless source of fuel for her unquenchable fascination with alien cultures, especially that of Earth, in which she wholeheartedly immersed herself. Kathryn graduated in the middle of her class and was assigned to the USS Federation as an Assistant Science Officer.

Harper’s duty fitness reports as an Ensign aboard the Federation were average, and after over a year serving there, she was promoted to Lieutenant JG. By the time she was eligible for promotion again two years later, she applied for the Chief Science Officer position aboard a dedicated science vessel, the USS Sagan, and was accepted. The Sagan was a Nova-class vessel, and the small-ship environment didn’t suit Kathryn well; she had trouble integrating with the crew, finding it cliquish and insular. After a year of discomfort, Chief of Science aboard the larger Akira-class USS von Braun opened up, and Harper transferred yet again.

The von Braun was a much better fit, and her fitness reports improved to above average levels, but Kathryn found herself growing increasingly bored with her duties in the science department. With her CO’s permission, she began to take piloting lessons from the ship’s helm officer. Kathryn qualified as a shuttlecraft pilot and found herself to have an innate talent for flying, likely fostered by the flight instruction she’d received during her childhood. Pursuit of this talent continued to progress, leading to her eventual certification to operate the ship’s helm. By the time she was being considered for promotion to Lt. Commander, her commanding officer had begun to notice an apparent lack of interest in her primary duties as Chief Science Officer.

Despite that, her CO approved the promotion and recommended that Kathryn take the Command Aptitude Test as a potential cure for her malaise. According to the recommendation written in the test sponsorship, her commanding officer had noticed the efficiency with which Kathryn had run her department, as well as the respect given to her by her subordinate officers, and thus considered her to be a good candidate for a command position. This came as a surprise to her, as she had never thought of herself as a particularly effective leader, but Harper decided to take her CO’s words to heart, taking—and passing—the arduous test.

Shortly after her entry into the pool of command officers in 2384, Vice Admiral Blackthorne selected Harper to command the beta shift aboard the USS Atlantis, flagship of Third Fleet. The quiet pace of the second shift was a welcome change, as was leaving the science department behind. Though her position remained subordinate and largely lacking in executive authority, Harper had the opportunity to command the ship through numerous tense situations when the CO and XO were unavailable. After a few years of service that saw her fitness ratings improve to excellent, she was promoted to Commander while temporarily acting as Executive Officer during a period in which the assigned XO had been taken prisoner by hostile forces.

In the months that followed that promotion, having noticed that a piloting background and natural feel for flying were recorded in her personnel file, Vice Admiral Blackthorne chose to evaluate Harper as a potential candidate to fill the vacant CAG position for Atlantis’s fighter wing, sensing that her talents were potentially being wasted on the beta shift. After a rigorous qualification flight on the SF-51 “Mustang” Space Superiority Vehicle, Harper was assigned to the position and went on to fulfill the role, as well as that of Navigation Officer on the Atlantis’s bridge, for several years. While serving in this capacity, her fitness reports improved to a rating of exceptional, indicating a much greater level of career satisfaction. Given the amount of combat flight experience she had gained by mid-2394, Harper felt duty-bound to volunteer for the STAR Taskforce Sigma mission to liberate Station Sigma Rho from the Tzenkethi, and served with distinction as the Flight Combat Specialist.

In early 2395, both Vice Admiral Blackthorne and Captain T’Kirr were declared deceased following their apparent deaths in a shuttlecraft explosion during a routine landing approach. Starfleet Command decided that an established face of authority from within the Atlantis crew would be the best choice to fill the sudden leadership vacuum. It was deemed that Harper’s tenures as beta-shift CO, Acting XO, and CAG satisfied the requirement to first serve as an Executive Officer or equivalent, and given her long-term excellence in service and time at rank, she was promoted to Captain. Upon her subsequent appointment as the Atlantis‘s new commanding officer, Kathryn Harper became the first female Risan to command a Federation starship.

Captain Harper’s command ability would be tested only months later when she was faced with a flotilla of asylum-seeking Romulan Republic refugees attempting to cross the neutral zone into Federation space, technically violating the treaty in their flight from atrocities committed by the Romulan Empire. Her orders were to stop them by any means necessary, and she did just that; she negotiated a historic treaty with the fledgeling Republic, opening trade in exchange for providing food, medical aid, and assistance in rebuilding infrastructure. While publicly lauded for her diplomatic feat, Captain Harper was privately reprimanded by her superiors for brokering a peaceful resolution; the unspoken subtext that she should have stopped the refugees with violence was shockingly counter to the stated values of Starfleet, a fact that she found suspicious and deeply troubling. Harper, Atlantis, and her crew were placed under orders to be confined to Starbase Vinland until further notice, awaiting a punitive decision from Starfleet Command.

While sequestered at Vinland, Captain Harper was contacted by an informant with credible information that, contrary to official records, Vice Admiral Blackthorne and Captain T’Kirr were alive and being held as prisoners in exile on a primitive world. The shuttlecraft explosion in which they had apparently perished had been expertly staged to cover their abduction, interrogation, and imprisonment by a covert organization known as Section 31 in its bid to gain control of Starfleet. These revelations increased Harper’s suspicion of her recent questionable orders and, with the willing assistance of her crew, she chose to defy those orders in commanding the escape of Atlantis from Starbase Vinland.

As fugitives, Captain Harper and her crew proceeded to follow the trail of their abducted commanding officers, even raiding the Section 31 facility where they had been held in an ultimately successful effort to determine their location. Captain Harper returned command of Atlantis to Vice Admiral Blackthorne and offered her surrender, as she had been ordered to do by Starfleet Command upon reporting the restoration of Blackthorne and Captain T’Kirr to active duty status. However, Blackthorne’s order was that Harper should instead resume her duties as CAG and Navigation Officer, which she did, having set in motion the end of Section 31’s attempted hostile takeover of the Federation.

In mid-2396, the Section 31 Crisis was resolved with the exposure and immediate dissolution of that organization. Captain Harper and the rest of the Atlantis crew were granted presidential immunity from prosecution for the justified but unlawful actions necessary to facilitate that outcome, and were also commended as heroes by the Federation Council, as were their allies. Vice Admiral Blackthorne accepted a promotion to full Admiral and Director of Starfleet Operations, and Captain T’Kirr accepted a promotion to Commodore and Assistant Director of Starfleet Operations. With the center seat once again vacant, Captain Harper resumed command of Atlantis, this time not as a burden thrust upon her out of apparent tragedy, but as a well-earned reward.

Medical Addendum, Stardate 11602.17: Commander Harper suffered from PTSD due to the heavy casualties suffered by the fighter wing under her command during the Tzenkethi conflict. She has responded well to treatment, and I have no concerns that would preclude her from returning to duty. — Dr. Nakanishtalla Endilev, Counselor, USS Atlantis

After leaving home to join Starfleet, Kathryn had little interest in her Risan heritage, preferring to study cultures and languages alien to her. She even legally changed her name soon after arriving on Earth because her Risan name contained a sound physically unpronounceable by humans. However, nearly losing her life in the line of duty in mid-2388 caused Kathryn to become increasingly introspective, which culminated in a cathartic experience that caused her to attempt to connect with her roots on a deeper level. After this experience, Kathryn has also returned to wearing her Risan forehead ornament while off-duty, something she had neglected since leaving home.

Generally an affable person with a sarcastic sense of humor, Kate enjoys spending her leisure time with friends, relaxing and laughing together. Kate has a lifelong love of sports, enjoying both the holographic and traditional varieties, and takes pride in maintaining her athletically-toned physique. Her favorite sport is tennis, which she acquired a taste for while on Earth, and she can commonly be found playing in the holodeck during her time off. Her parents noticed a musical inclination in Kate at a young age and encouraged it by teaching her to sing and to play a Risan flute. As an adult, Kate’s singing voice has evolved into a silky alto, and her flute skill easily transferred to the Terran variety of the instrument, one of which she keeps in her quarters.

Although exceptionally talented with most languages, having even written the authoritative work on ancient Gencodian, English idioms continually are a source of frustration for Kate. She often confuses them, mixing up words, usually with unintentionally humorous results. However, her mastery of profanity in any language that she speaks is unparalleled.

What Do You Remember?
Posted on November 30th, 2020 by Emilaina Acacia and Kathryn Harper
Posted in Logs   2 Comments   Log of the Month Award


Two Questions in the Ready Room
Posted on March 1st, 2020 by Linxi Jude and Kathryn Harper
Posted in Logs   3 Comments   Log of the Month Award


Left Behind
Posted on December 17th, 2019 by Kuari and Kathryn Harper
Posted in Logs   3 Comments   Log of the Month Award


Reliance
Posted on November 8th, 2019 by Kuari and Kathryn Harper
Posted in Logs   3 Comments   Log of the Month Award


Duty to the Xov
Posted on August 31st, 2019 by Kathryn Harper
Posted in Logs   4 Comments


Blue Clouds
Posted on August 28th, 2019 by Kuari and Kathryn Harper
Posted in Logs   3 Comments   Log of the Month Award


Command After Hours: Down, But Not Out
Posted on March 20th, 2019 by Kuari and Kathryn Harper
Posted in Logs   2 Comments


Bear With Me
Posted on February 20th, 2019 by Linxi Jude and Kathryn Harper
Posted in Logs   3 Comments