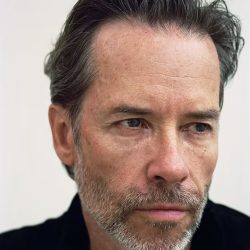 Jack finds comfort in being unremarkable: simple haircut, simple fashion. Though well-preserved for someone pushing 50, he wears the face of a man who has seen and felt a great deal.

John Stark Leirone was born in 2353 to Richard Leirone and Elena Tennison, in Havre, Montana, Earth. Following his parents’ messy divorce and his mother’s departure from their lives, Jack and his father moved to Dellenville, Colorado in late 2361.

Depression ravaged his small household. Though Richard was a caring father, he never allowed anyone—Jack included—to get close to him. Jack himself isolated from his peers, forcing upon himself a ruthless self-reliance. In his teens Jack was given to moments of severe rage, in one notable instance severely beating a fellow student as the result of a conflict. For the rest of his high school years, he was mandated to mental and behavioral therapy, and by the time he graduated he had made remarkable improvements.

He enrolled at Starfleet Academy in 2371 and had prospects to become a marine, but dropped out with no explanation after little more than a year.

Resurfacing in 2379, Jack re-enrolled in Starfleet Academy and focused on a new intrigue: engineering. He graduated in 2383 and promptly joined the USS Atlantis, serving under then-Vice Admiral Ian Blackthorne.

In 2384 Jack transferred to the USS Gabriel, where he met Dr. Abigail Hart. They carried on a relationship for four years before marrying in 2389. Following a life-and-death close call aboard the Gabriel, Jack and Abigail took an extended leave of absence from Starfleet and settled in San Francisco.

Richard Leirone died by suicide in 2391. Unable to healthily cope with this tragedy, Jack regressed to a depressive and volatile state, culminating in the end of his marriage in 2392. He re-entered therapy, and, thereafter, Starfleet—taking on assignment with the newly commissioned USS Meridian-A.


When the Circle Closed
Posted on May 7th, 2022 by Jack Leirone
Posted in Logs   2 Comments


The Good Times Are Killing Me
Posted on June 2nd, 2021 by Jack Leirone
Posted in Logs   3 Comments


The Seventh Sense
Posted on December 23rd, 2004 by Jack Leirone
Posted in Logs   No Comments   Log of the Month Award


Neverwhere
Posted on October 28th, 2004 by Jack Leirone
Posted in Logs   No Comments   Log of the Month Award


Love Makes Hunters of Us All
Posted on September 16th, 2004 by Adam Drake and Jack Leirone
Posted in Logs   No Comments   Log of the Month Award


Devoid of Regret
Posted on August 4th, 2004 by Jack Leirone
Posted in Logs   No Comments