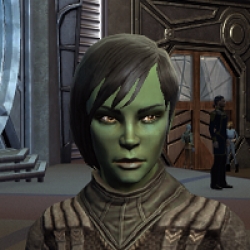 Inala is virtually indistinguishable from a full-blooded Orion female, save perhaps for her bright amber eyes. She also lacks the ability to produce mind-altering pheromones. She has the green skin, the straight black hair, and she carries herself with a certain grace. Still, one gets the impression she’s not entirely comfortable in her own skin, as indicated by her usually-conservative dress while off-duty.

Ronald Emeric was a perfectly ordinary engineer aboard a perfectly ordinary freighter that spent a somewhat less-ordinary month in Orion Syndicate space. He fell in love with one of those famed Orion slave girls in a shady bar on Farius Prime, and very foolishly attempted to get her to run off with him to live a happy life on Earth. For whatever reason, Nivara didn’t laugh him off the planet, but she did what she could to dissuade him. Ronald persisted, and through a series of unfortunate mistakes, managed to make both he and Nivara targets for Syndicate hit squads. Thoroughly out of options, Nivara decided to accept Ronald’s offer, despite having grave misgivings about the whole thing.

Eventually, Nivara began to actually care for Ronald. They soon had a child together, which was something of a minor miracle, according to Starfleet Medical. While Orions had been known to interbreed with other races, Orion/Human mixes were relatively unheard of. Still, Inala grew up to be a healthy and normal child, right until puberty hit.

For various reasons, Inala has always been highly pursued by peers with romantic intent. While Federation society tends to be more progressive than others, there still seemed to be some stigma about Orion girls, and the constant attention by would-be suitors caused her no end of grief. As a result, she became rather self-conscious about her body, and would go out of her way to make herself as unattractive as possible, eventually developing some unhealthy habits, forcing her parents to intervene.

She managed to deal with most of her deeper issues, and has come to largely accept herself for who she is, but she has little patience for any romantic inquiries, and can get defensive at times when she thinks she’s being objectified.

Inala didn’t really have a direction in mind when she joined Starfleet Academy, and only managed to find one after her second year. She’d dabbled in a bit of everything, and while she found aspects of departments that she liked, nothing seemed to spark her true passion. That changed in her fourth semester, when she finally took a course in Starship Operations. She found she had a knack for multitasking, especially in crunch time, and she seemed to thrive off the pressure.

Her grades we above average, but she continued to have trouble interacting with her peers. She had a few friends, but continued pursuit by persistent peers pushed her further and further away from social situations. This impacted her ability to work with others somewhat, as she became a little paranoid, and started reading more and more into the words and actions of those around her.

She managed to work through the worst of it in her senior year, though she still finds herself disinclined to engage with others while off-duty.

Despite a general lack of information about Orion/Human hybrids, Inala appears to be in good health, and no major genetic issues are expected. She’s still advised to take bi-annual genetic screenings just in case, however.