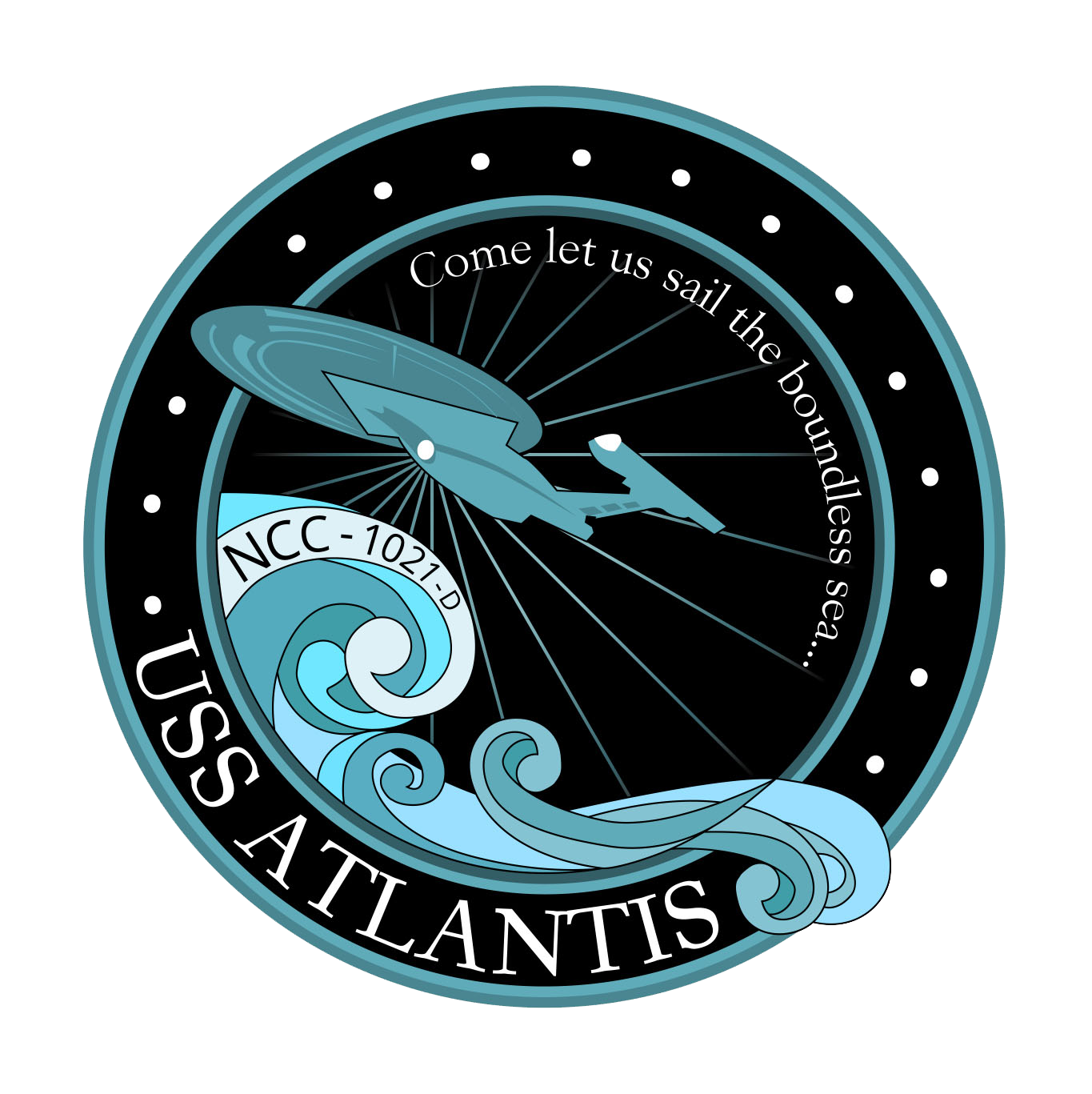 The USS Atlantis is one of twenty-six commissioned Sovereign Class vessels, the most notable among the others being the USS Sovereign and the USS Enterprise. The Atlantis was proof that this new class of ships would live up to and surpass all of the expectations placed upon it, for the Sovereign Class far exceeded the capabilities of Starfleet's other classes of ships. This new addition to the class expressed Starfleet's confidence in the reliability of the Sovereign Class's technological leaps in weapon, shield, and sensor technology, though several minor design changes were made between the Atlantis and the previous Sovereign Class vessels. These design changes reflected newer developments in all areas of ship construction. Atlantis's systems upped the level of reliability from the previous models of Sovereign Class vessels, illustrating that the class matured and was ready to be expanded, as it has been in the years since Atlantis's launch in 2376.

from The Beckoning, by Bill Pogue, Skylab 4 Astronaut


The origins of the Sovereign class date back as far as 2338. At this time relationships between the Federation and the Klingon Empire had degraded significantly, to the point where war was considered by many to be imminent. The President ordered Starfleet to place a design proposal for a new class of starship with much greater military capability than current designs. This project was in the advanced planning stage when the loss of the Enterprise-C during the Nerendra III incident eased tensions considerably. The warship project was initially to be scrapped, but Starfleet was instead asked to continue the project on a research basis only. Dubbed the Sovereign project, it became a theoretical Starfleet battlecruiser designed only as a computer model, with specimen hardware occasionally produced to test the design principles. The intention was to create a design that could be put into production with no delay, should a future crisis present itself.

The basic design was to be updated every five years so as to incorporate technology advances as they occurred. Initially the Sovereign design was a simple re-working of the Ambassador class, emphasizing weapons rather than exploratory and diplomatic capabilities. In the design updates of 2350, 55 and 60 much of the technology being developed for the Galaxy class project was incorporated, especially in the nacelle and warp core design. The re-establishing of relations with the Romulans in 2364 led to a major revision in the 2365 update, and many elements of the Sovereign went into low-rate production in order to establish a stockpile ready for rapid assembly.

In mid 2365 first contact was also made with the Borg. The Sovereign project was activated and construction began on the first four ships of the class. However, it was apparent that much of the Sovereign's weaponry was based on that of the Galaxy class - a vessel which had proven ineffective against the Borg during that first encounter. New weapons were in preparation for the next design update due in 2370, but these were not going to be available in the immediate future. It was clear that despite the engineers' best intentions, the Sovereign project was not going to meet its primary goal - to get a warship into service fast enough to meet the crisis now looming.

The answer Starfleet settled on was to continue construction of the hull, propulsion, computer, and sensor systems of the ships already under construction but to suspend work on the shield, phaser and photon torpedo systems for three years. Instead, a crash-development project was begun to field a small, very easily produced warship incorporating the new weapons - essentially a replay of the Sovereign project in miniature. To cut size - and therefore design and build time - to a minimum, the new vessel would only be capable of short duration missions. The vessel would be very maintenance intensive, but would carry only limited stocks of non-replicateable spares. Combined with limited accommodation standards and small fuel reserves the new class would be capable of maintaining full readiness for only six to eight weeks during independent operations, far less than had been envisaged for the Sovereign. An important secondary role of this Defiant class was as a development testbed for the technology which would be worked into the Sovereign project as soon as it was ready.

Construction continued on the Sovereigns throughout the late 2360s. With the destruction of the Borg cube in 2366, Starfleet deemed that the threat had reduced to a level which would allow the Sovereigns to enter service before any renewed offensive. The Defiant class was therefore suspended, although the prototype was put into storage rather than scrapped. The lessons learned with the Defiant were incorporated into the Sovereign when work resumed on her weapons, a process which continued after the USS Defiant was reactivated for use at DS9. The switch from photon to quantum torpedoes and the inclusion of ablative armor are prime examples of this process. In addition, the bio-neural computer system pioneered by the Intrepid class was also included. The first of the class was was launched in 2371 as the USS Sovereign, with the USS Honorious due to follow six months later. The loss of the USS Enterprise in that year led to a last-minute re-christening of the Honorious as the USS Enterprise, NCC-1701-E.

The Sovereign class has emerged from the dockyards as Starfleet's most sophisticated and comprehensively armed vessel. The vessel is equipped with a new variant of the Type XII phaser array - formerly known as the 'Type X+' for security reasons - which equips the Federation's most powerful Starbases and deep space facilities. The type twelve has a raw beam power output some 60% more powerful than the type ten arrays installed on the Galaxy class. In addition the type twelve has a shorter recharge time and can fire a longer sustained burst, giving each bank a combat effectiveness 79.4% greater than a type ten array. Since the Sovereign carries fourteen arrays compared to Galaxy's twelve, this gives the ship an overall 92.6% increase in phaser capability.

The torpedo armament is similarly impressive. The large quantum torpedo turret forward of the deflector dish is capable of firing five rounds per second, a greater overall rate of fire than the two main ten round burst photon torpedo tubes of the Galaxy class combined. Rearward quantum torpedo coverage is provided by an identical tube above the main shuttle bay. Backup to the quantum torpedoes is provided by four photon tubes; these are located at the base of the engineering section in pairs which face forward and aft and are also capable of twelve round bursts. This gives the Sovereign class the most powerful torpedo armament of any vessel in Starfleet service.

The shield system of the Sovereign class is similarly the most powerful of any Starfleet ship; the design was modified just prior to installation in order to increase effectiveness against both high energy tractor beams and phased polaron particles, measures clearly aimed at the Borg and Dominion respectively. Under normal operation the shield modulation frequencies are under the control of the ship's computer system, which continually evaluates incoming weapons fire and automatically re-modulates the shields to give the most effective possible defense. It is thought - hoped - that this system will also enable the Sovereign class shield system to prevent beam-through by Borg transporter technology.

The warp engines of the Sovereign are of a new design which eliminates subspace distortion effects inherent to standard warp drives, a feature now becoming common on most Starfleet ships. The Sovereign class is currently the fastest vessel in Starfleet, with a maximum cruise speed of Warp 9.9 and a top speed of Warp 9.99 for up to twenty four hours. The very high cruise speed is intended to allow the ship to deploy as rapidly as possible to potential trouble spots. Her impulse drive system is the most sophisticated model in production, giving the Sovereign class a maneuverability equal to that of a vessel one quarter its size.

The Sovereign's baptism of fire came in 2373 when a Borg vessel again attacked the Federation. The USS Sovereign herself was too far away to participate and the USS Enterprise - the only other Sovereign in service - was ordered to patrol the Romulan Neutral Zone rather than join the fleet engaging the Borg, a curious decision since engaging the Borg is what the ship was specifically designed for. Captain Picard disobeyed this order and joined the battle in Earth orbit, coordinating a mass strike on a weak point on the cube and destroying it. The Enterprise was subsequently pulled into the past by the Borg and almost assimilated. The crew were successful in defeating the Borg and returning to 2373. Captain Picard was subsequently ruled to have been justified in disobeying his orders, and continues in command of the Enterprise.

The USS Atlantis was completed three years after this incident, and Starfleet continues to support the Sovereign Class as the premier starship of this time. Since the Atlantis was launched, twenty Sovereigns have been built, bringing the total number of Sovereigns in the fleet to twenty-six.