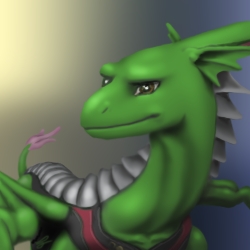 No registered skills unique to subject. All listed skills are noteworthy to species.

Interview excerpts, Major Jeremy Riggs, submitted by Professor Timothy Tate:
“I’ve seen much finer shots pass through these grounds. Kuari couldn’t even seat a rifle properly on Day One, and when she tried, it made the whole line rightly nervous. She’s determined, though, I’ll give her that. Her marksmanship barely passed. I have to say, in my opinion, it was more the grip than her aim. Hand-eye coordination. You’ve got to have hands for that.”

“Kuari performed exceptionally in her unarmed combat course. Top of her class. The last student to practice each day got to be her sparring partner for the day. Let me tell you, I never got a late start all year. Don’t think for a minute her performance will carry her through the rest of her courses, though. Well, that’s not fair. I think she knows it. Still, it seems Starfleet will accept any species these days.”

Kuari appears to be in good health for her species.

Article, submitted by Dr. Gerreta Karmen:
Kuari is a fascinating subject! Although I dare say, when she first stepped into my office like nothing so much as a tame canine trained to walk in and sit next to the client’s chair, I told my secretary she brought Kuari to the wrong kind of doctor! Kuari then proceeded to laugh, and I just about fainted at all the teeth. Her visage was imposing to say the least, but when she didn’t jump over my desk and devour me on the spot, I quickly learned to like her.

I was told Kuari was a unique case, and Academy Director Jameson wanted her to sit through sessions over her four years due to the unknown nature of her species. Her father is the Rucaran Ambassador, but they wanted more attention on a Rucara going through Starfleet training. They trust her mother with medical instruments. I suppose they wanted to make sure guns were okay, too.

I was treated to a Rucaran song when I disabled the UT on several occasions. Her language, Rukaka as she calls it, is the closest I’ve heard to music of any other species I’ve listened to. She tells me I’ve heard nothing until I’ve listened to an entire tribe of Rucara at once!

Sometimes I can’t tell how she’s reading my feelings, whether it’s through empathy or a combination of other senses. I’ve asked her to read my mind, but she tells me she cannot. Still, she tells me there are ants crawling in the third drawer of my desk. I’ve chosen not to open it, as I’m sure I didn’t leave anything important in there.

In my professional opinion, Kuari appears to be an openly honest individual. Sometimes… too open. She at times lacks tact, and I’ve seen her primal nature surface in minor ways on numerous occasions. On that note, I once asked her why she was going through Starfleet training. She told me she was willing to put a few years into integrating into our culture, that she wanted to take an active role in its defense. She finds Humans interesting. She said Humans think more, that they make her think more, and that she likes thinking.

Kuari has passed her exams adequately. Although we’ve had to work through keeping her civil in public situations, she exhibits fiercely loyal characteristics that I believe will serve her well wherever she is posted.

Left Behind
Posted on December 17th, 2019 by Kuari and Kathryn Harper
Posted in Logs   3 Comments   Log of the Month Award


Reliance
Posted on November 8th, 2019 by Kuari and Kathryn Harper
Posted in Logs   3 Comments   Log of the Month Award


Blue Clouds
Posted on August 28th, 2019 by Kuari and Kathryn Harper
Posted in Logs   3 Comments   Log of the Month Award


Command After Hours: Down, But Not Out
Posted on March 20th, 2019 by Kuari and Kathryn Harper
Posted in Logs   2 Comments


Draconic
Posted on February 28th, 2019 by Kuari
Posted in Logs   3 Comments   Log of the Month Award


A Chance to Live
Posted on October 3rd, 2018 by Velina Tailor and Kuari
Posted in Logs   1 Comment


Command After Hours: Poolside
Posted on March 31st, 2018 by Kuari, Alexis Wright and Kathryn Harper
Posted in Logs   No Comments   Log of the Month Award


Thirty-Nine
Posted on September 15th, 2017 by Kuari and Kathryn Harper
Posted in Logs   2 Comments   Log of the Month Award