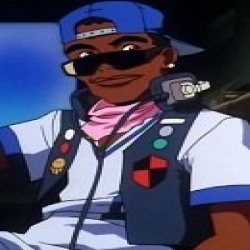 Rodney tends a bit toward the skinny side, blessed by metabolism with one of those “hollow legs” you always hear about, and of only about average height. He’s always been healthy though, similarly endowed with a lot of energy that, when he hasn’t committed it to outlasting a particularly long and arduous shift, he’s burned off over the years with a number of athletic pursuits. Hover boarding and parkour courses on the holodeck are among his favorites.

His hair and eyes are both of a dark brown that more of less match his skin. The former is naturally a bit curly, but kept cut short. His mouth is a bit disproportionately large, which he’s always been just a tad self-conscious about it, but when pulled back into a smile, a not uncommon occurrence, it has at times been described as infectious. His gaze is usually bright and curious, hinting at a thus far undulled optimism about the future and the job.

Rodney Quinn was a born colony kid, but one of somewhat odd classification, born within the human home system and therefore neither a child of the homeworld nor the independent frontier. It might be said, however, that Vesta hit a sort of sweet spot between the two. The outer colonies certainly had a rugged and unspoiled charm to them, but unless some disaster befell the place, they were by their very nature quiet, remote, and in some cases perhaps a bit dull for a child. Earth was, by contrast, one of the galaxy’s great metropolitan hub worlds, where inquisitive eyes could see much of what the stars could offer, but always through a bit of a filter. It was, after all, the seat of the great and civilizing Federation, the Pax Terra as it were. A lovely place, to be sure, but for the most part, what transpired there did so with the knowledge and approval of the respectable.

Things had always been a bit different in the asteroid colonies out past Mars, and Vesta perhaps most of all. The place had begun as a simple mining operation more than 200 years before Quinn was even born, but bit by bit over the years, tapped out mineral deposits had left great caverns in their wake, life support systems already in place and easily repurposed as habitats for families. By the late 24th century, this process had yielded a great city, its neighborhoods fanning outward from a great central shaft a half mile wide and more than five deep. For the most part, this was not a no man’s land or anything like it. The top level, protected by its great atmospheric dome but looking out on the stars, was adjoined by a fairly bustling spaceport and an accompanying Star Fleet presence. And at the very bottom, where actual mining continued alongside new construction, this too ensured that lawful eyes lay upon the place. But in places in between, if one knew where to look or knew not the places to avoid, one could theoretically experience civilization in all senses and consequences of the term.

It was into this world that Rodney was born, and it could theoretically have been an unfortunate match to a child who had inherited both the curiosity of his father’s youth, as well as some of his mother’s adventurous leanings. But both Abner and Rishan had managed their fill of impetuous and foolish mistakes before committing themselves to raising children, and wished to ensure these traits were tempered in their son with a healthy dose of common sense. While Rishan had always made her living as a purely civilian pilot, once on long distance fast courier runs but restricted more to the Sol system to accommodate family life, Abner had served in Star Fleet, working as an engineer aboard the USS Toynbee, one of the aging but honored Excelsiors. He’d never had any intention of being a career man, though he has maintained a love for that class of ship ever since, but it was a role he reprised years later, admittedly not without a good deal of discussion and misgivings. When Rodney was ten, a year into the Dominion War, his father made the decision that he couldn’t bear to sit back, drink his replicator beer and watch news feeds about the Federation’s mounting losses and waning prospects when he had skills that could help, skills that the Federation had given him. And so, while Rishan stayed behind to watch over Rodney and his little brother Jamal, Abner squeezed back into the uniform at 42, and took his tool box out to one of the newly rebuilt forward operating bases, where he joined the feverish efforts to keep the fleet operational and the Jem’Hadar well away from Vesta.

While it hadn’t specifically been Abner’s intention, this probably made it inevitable that Rodney would follow in his father’s footsteps some day. But in the meantime, and especially after the Dominion was at last defeated a year later, his parents ensured that both Rodney and Jamal had their childhoods, and gave them both enough slack to get into a bit of trouble, provided it was of the relatively benign sort. And Rodney certainly did his part, engaging in the sort of foolishness that might be expected of a teenager. Teaching himself how to override the replicator lockouts and engage in a bit of underage drinking, hiding away dirty vids he’d picked up, flying shuttles at imprudent velocities, and so on. It was only with that last one that he ever managed to seriously get himself cast out from his parents’ good graces; he never really had much of a violent streak, despite the occasional schoolyard scuffle, and he discovered early on that alcohol went to his head too quickly for him to ever drink too much of it in a sitting. But when he was 17, he did have a job as a pizza delivery boy – Yes, one could always replicate their own pizza, but the recipe at Draco’s was both famous and proprietary. – and the most direct way between most any two points on Vesta was always either up or down that great central spine. One day, after years of hearing about foolhardy daredevils doing it and two months of restraining the urge to try it for himself, he could restrain that adventurous side no longer, and put the skills his mother had taught him to use. He killed the engine mid-flight and let free fall take him most of the way down to the desired depth before reactivating the shuttle in just the nick of time and deftly getting himself back on course.

He noted the contents of his bladder had stayed where they belonged, and judged that an adrenaline soaked success. The second time he tried it, and subsequently got caught by the cops, less so. After that, for the next year and a half, he was working at his father’s ship and shuttle service shop during his non-school hours, under Abner’s hawkish supervision. And while that was not the ideal outcome in the mind of either Quinn, it was ultimately a good fit. Abner would on several occasions grow irritated at his son’s somewhat squeamish reluctance to get his hands dirty exploring the guts of a malfunctioning ship, he could not deny that his son had a lot of natural talent for the work. Over time he realized Rodney was a lot more effective if given free reign to do the job his own way, taking a good long look at the diagnostic software and planning the job out in advance before diving in, thus minimizing the time spent cooped up in service crawlways. And by the same token, Rodney did finally learn some much needed lessons about discipline and focus.

And so, when the time ultimately came for Rodney to plan out the shape of his own future, Abner was willing to write a letter of recommendation. A bit of understandable nepotism and the one black mark on the younger Quinn’s record aside, the word of a former Star Fleet officer carried weight, and the young man received the nod from the Powers That Be in San Francisco to set out on what looked to be a promising future, provided he could keep his head on straight.

He graduated Starfleet Academy after the standard 4 years with degrees in Engineering and Advanced Theoretical Physics. He dated a few times, but nothing ever worked out. He managed consistent attendance at the party circuit, but managed to avoid pulling anything too cripplingly bone-headed.

Top of his class in Plasma Physics, Turn of the Millennium Technology, and Creative Writing.

Marksmanship rated passable, despite noted disinterest by instructors. Opted out of any advanced hand to hand courses.

Noted advanced piloting proficiency at Academy Flight Range. Certification still current for all shuttle models. One-time candidate for Nova Squadron membership. Opted out due to feared risk of temptation toward something awesome but stupid.

Citizen Soldiers
Posted on May 22nd, 2018 by Rodney Quinn and Kathryn Harper
Posted in Logs   2 Comments   Log of the Month Award


The Joys of Management
Posted on February 25th, 2015 by Rodney Quinn
Posted in Logs   1 Comment   Log of the Month Award


The Soft Touch
Posted on September 24th, 2014 by Rodney Quinn
Posted in Logs   2 Comments   Log of the Month Award


Below Decks
Posted on January 5th, 2011 by Rodney Quinn
Posted in Logs   2 Comments   Log of the Month Award